How Often Does a Water Softener Regenerate? [2022] You Asked, We Answered!

by jayorban
in Questions Answers
0 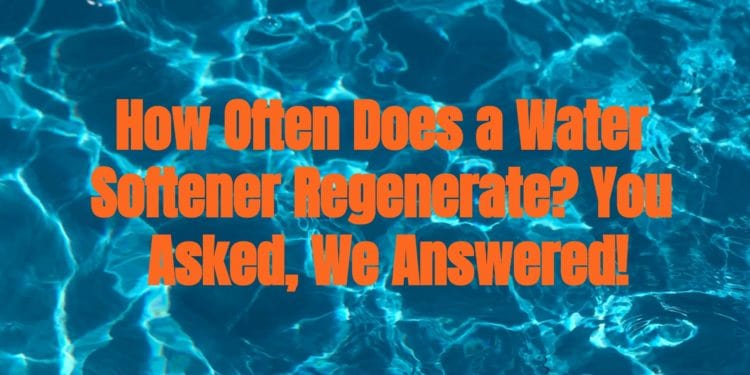 How Often Does a Water Softener Regenerate? You Asked, We Answered!

Hard water is one of the most common problems faced by homeowners. It is the root cause of various problems such as pipe clogging, decreased water pressure, destroyed appliances, etcetera. Using untreated water or hard water to take a shower can also dry out your skin and hair.

To get rid of all of these problems, there is a simple solution that goes by the name water softener. It is a filtration system that regenerates the water by eliminating the presence of minerals such as magnesium and calcium which have more disadvantages than benefits.

Magnesium and calcium are the sources of hardness in water. Once they have been efficiently removed by the water softener, the water is safe to use for all purposes. If you don’t already own a water softener, this is your cue to get one as soon as possible because it is surely one of the best investments.

And for those who have a water softener at their home but have several queries related to it, this is the right article for you. In this article, we will answer the question of how often does a water softener regenerate. It is one of the most commonly asked questions by soft water generator owners and a very authentic question too.

What’s the point of investing your money in an appliance if it is not performing its function properly? If you too have been wondering how often does a water softener regenerate? Then stay with us and read this article till the end because we have addressed this question in detail in the upcoming sections.

Modern Water Softeners: Here are some of the best water softeners with the shortest regeneration cycle.

What is a Water Softener?

A water softener is an appliance that performs a water regeneration process on your hard water to turn it into soft water. This happens through an exchange process, or water regeration cycle. Hard water is sent through a resin bed in the water softener. This resin bed is loaded with sodium ions and has the capability of trapping magnesium and calcium i.e. the minerals that cause the hardness of the water.

As the hard water passes through this bed, these harsh minerals are effectively removed from it, and the number of sodium ions in the water increase. Hence, the exchange process. In turn for taking away magnesium and calcium, the water softener saturates the water with sodium ions.

However, this process only works well as long as the resin bed is not 100% contaminated with water. A lot of people may not know this but the resin bed in the water softener needs to be recharged after it has been regenerating hard water for quite a time. Otherwise, this whole process would be a waste of time as well as energy.

Continue reading to find out how often does a water softener regenerate to learn how long should it take for the regeneration process to take place. If it is taking longer than usual, then it might be because the resin bed is supersaturated and needs a recharge. The exchange process tends to slow down if the concentration gradient between the hard water and the resin bed becomes flatter.

Now, let’s go ahead and answer the most awaited question how often does a water softener regenerate? Let’s find out!

How Often Does a Water Softener Regenerate?

Factors that Determine How Often Does a Water Softener Regenerate:

How do i know if my water softener is regenerating?

Following are some key factors that can affect the frequency of the water regeneration process. Let’s check them out:

Water Hardness Level: One of the most important things that affect how often your water softener needs to regenerate is the hardness of the water in your area. The harder the water, the more amount of calcium and magnesium it contains. Hence, it requires frequent regeneration to eliminate hard water minerals.

Untreated Water: It is highly significant to regenerate your water according to how hard it is. Otherwise, you will not be able to ensure a constant supply of soft water at your home. For more frequent water regeneration, a greater amount of salt is required and the resin bed will also need to be charged more often than usual.

The answer to how often does a water softener regenerate also depends on your daily usage of water. If you don’t have an idea of the amount of the gallons of water you consume on a daily basis, then it might be tough for you to calculate how often the frequency of regeneration for the water softener is supposed to be.

The purpose of a water softener is not only to eliminate hard minerals from the water but should also be able to maintain an abundant supply of soft water in your home throughout the day.

Therefore, if you live with a large family, your water softener will have to regenerate more often than it would have if you were living in a small family. The reason behind this is no rocket science. In larger families, the average consumption of water is more than in smaller families therefore the supply of water needs to be adequate. Hence, more frequency of regeneration is required!

Another essential factor in determining the frequency of water regeneration is the capacity of the resin tank. Tanks with higher capacity can regenerate a higher volume of water in a short period of time since they can contain more sodium ions and can also eliminate a greater quantity of calcium and magnesium. Furthermore, a higher capacity resin tank does not require the recharge of the resin bed as frequently.

However, an important thing to consider here is if you have a large family to accommodate then you will still need to regenerate the water more often even if the resin tank is a higher capacity. This is because even though a higher volume of water will be regenerated at once, the consumption of water will also be greater so it won’t matter.

Over time, the quality and structure of the resin bed begin to deteriorate. This means that when the resin bed is new, it will give good results since it performs at its maximum capacity. However, as time passes and the resin gets old and worn out, it will start performing less and will not be able to absorb as much calcium and magnesium ions.

If a long time has passed since you last recharged or replaced your resin bed, then you may require a more frequent regeneration of your water to ensure a sufficient supply of water.

How often does a water softener regenerate also depends on the levels of iron in the water. Similar to magnesium and calcium, iron is also a mineral that is considered to be less beneficial and thus needs to be removed during the regeneration process.

However, it is important to note that water softeners do not possess the ability to completely remove iron from the gallons of water. If the iron levels in the water are less, then the water softener would be able to remove it completely and will not require very frequent regeneration.

But on the other hand, if the water in your area contains high levels of iron, then the water softener won’t be able to eliminate it. Plus, decreasing the iron levels in the water also leads to the damage of water softener. Over time, the performance of your system will decline and you will need to filter more often to get soft water.

The performance of every machinery or appliance tends to decline with time. It is the same case with water softeners. If it has been years since you bought yourself a water softener, then it may require more frequent regeneration than it did when it was newly bought.

A good-quality water softener has a life of approximately two decades before it starts losing its functionality. Therefore, it is more like a one-time investment. So, get yourself a good water softener as it will last years before you will finally need an update!

How Often Does A Water Softener Regenerate Conclusion:

So, today we learned how often does a water softener regenerate and the factors that can affect the frequency of the regeneration process. Now that you know the answer to the most asked question, it is time for you to start keeping tabs on your water softener. Notice if it is working well, and regenerating just as needed!

Modern Water Softeners: Here are some of the best water softeners with the shortest regeneration cycle.

How Much Does a Beer Can Weigh? New [2022] You Asked We Answered

How Much Does a Beer Can Weigh? New [2022] You Asked We Answered

No Result
View All Result

Copyright 2022 All Rights Reserved Jaysonlinereviews.com Skipping The Year 2020 and Covid-19 Since This Site Was Born In 2009!